'Across the Board': a post-colonial chess set 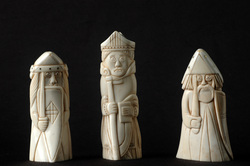 Joanne Drayton, Bishop and 2 Rooks, response to Lewis Chessmen
'"Across the Board' is a semi-autobiographical project inspired by the urge to bring carved representations of my ancestors and my partner’s ancestors to a chessboard, which is a metaphor for the post-colonial relationship in New Zealand between Maori and Pakeha, or pale skinned people. The outcome will be a non-fiction narrative driven, not just by historical and theoretical research, but by the practice based investigations of a twenty-first-century carving studio. I began working on this project in 2009, when I started to research and carve a chess set inspired by the Lewis chessmen. Susan Stewart’s book On Longing (1993) provided me with some thought provoking ideas around the notions of nostalgia and the souvenir, which established the beginning of a theoretical context for my work ..."