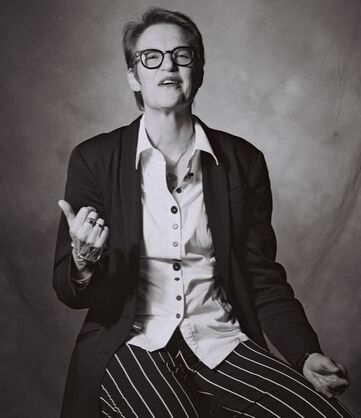 Joanne Drayton in Upstate New York
Joanne Drayton is an acclaimed New Zealand author whose output is globally recognized. Her up-coming book is a memoir titled The Queen's Wife (to be released by Penguin: 31 January 2023). As part of this project, she has carved a post-colonial chess set in response to the Lewis pieces in the British Museum.

Her book Hudson & Halls: The Food of Love was the winner of the Royal Society Te Aparangi Award for General Non-Fiction at the Ockham New Zealand Book Awards in May 2019, and was a cover story for the NZ Listener in October 2018.

Joanne’s The Search for Anne Perry was numbered in the top 10 non-fiction books on the New York Times BESTSELLER list. It was a finalist in the prestigious New Zealand Book Awards in August 2013; it was the subject of a 60 Minutes programme; and a cover story for the NZ Listener. It is an 'important' and ‘beguiling’ read that has received excellent reviews. The subject of the biography, Anne Perry, needs no introduction as a frequent author on the New York Times bestseller list herself. Perry’s dramatic story of teenage murder and redemption is one that has inspired many.

Both The Search for Anne Perry and Hudson & Halls: The Food of Love have been optioned for feature films.

Her critically acclaimed Ngaio Marsh: Her Life in Crime (2008) was a Christmas pick of the Independent newspaper when it was released in the UK in 2009. Her other biographies of expatriate painters include Frances Hodgkins: A Private Viewing (Random House, 2005); Rhona Haszard: An Experimental Expatriate NZ Artist (CUP, 2002); and Edith Collier: Her Life and Work (CUP, 1999). She has curated exhibitions and publishes in art history, theory and biography. In 2007, she was awarded a National Library Fellowship, and in 2017 the prestigious Logan Fellowship at the Carey Institute in Upstate New York.

Joanne's interests include running, art, music and reading.  Joanne is a research associate at the University of Auckland and an English teacher at Avondale College. She lives in Auckland, New Zealand, with her partner and three cats.